A Complete History of Comedy Magicians 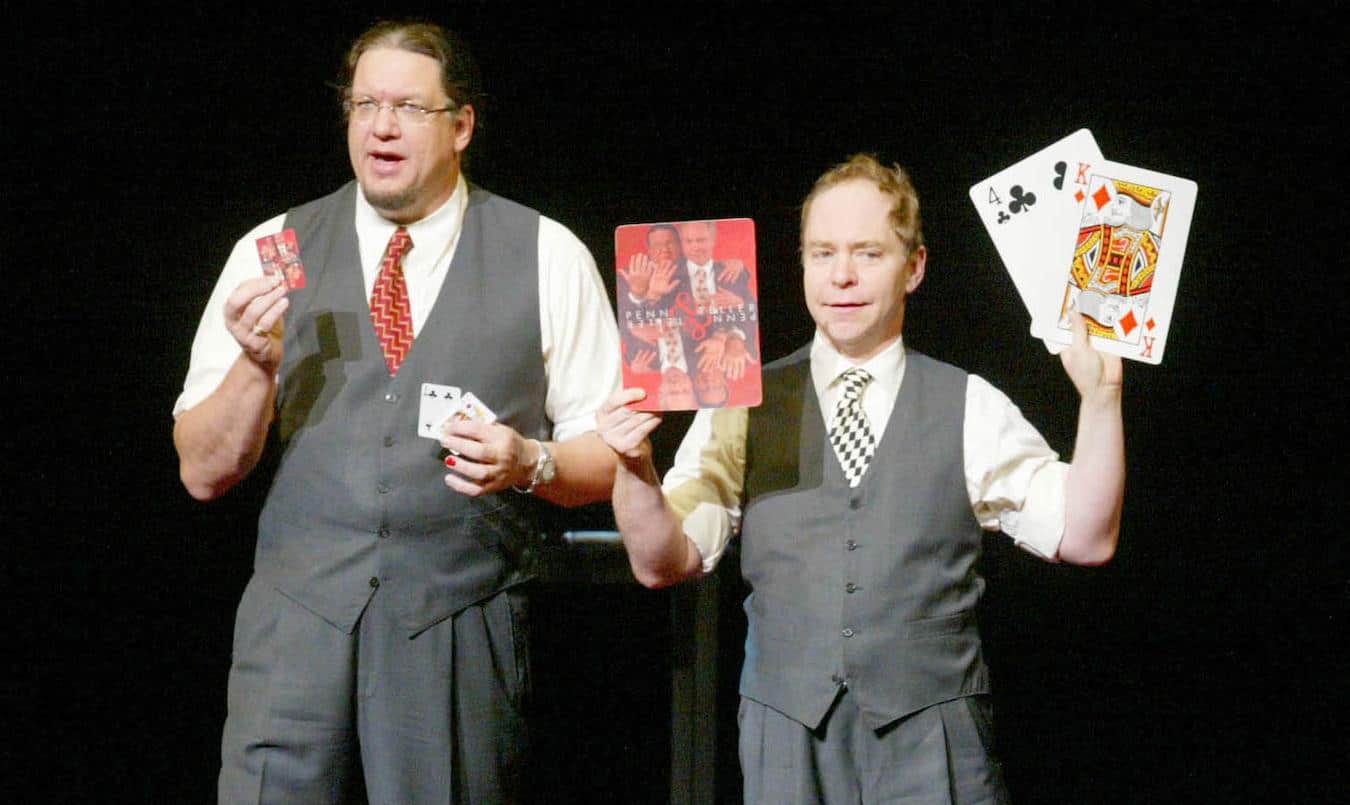 Clean, and not-so-clean, comedy magicians have dazzled us throughout history. In this article, you will get the chance to meet some of the greats who made modern magic what it is today.

Far too often when we hear the word “magic,” we think of children’s birthday parties. But this completely underestimates the craft that so many have dedicated their lives to.

We can all agree that magic is inherently funny. Why? Because it is rooted in what makes people laugh – surprise!

But before we dive into our journey of comedy magicians, it’s important to take a step back and look at where comedy magic got its start.

Let’s begin with our list of comedy magicians who helped to shape modern magic today.

See Related: What Is A Corporate Magician?

A quick note on the history of magic

Magic theatre and the magical arts are nothing new. In fact, vaudeville has largely been considered the birthing ground of both comedy and magic.

Comedy magicians come from this rich tradition of performance art. Through props, characters, and audience interaction, vaudeville laid the foundation for comedy magic.

We still see these elements in comedy magic shows today. Below in our list of comedy magicians, you’ll find the use of props, characters, and audience interactions in each magician’s signature. Now you know that vaudeville is where it all came from.

Tommy Cooper got his start in comedy magic in the 1940s and he gave his life to the craft. Literally! While performing magic tricks in front of a live television show, he collapsed from a heart attack.

But being the talented stage magician he was, the audience thought it was a gag! He made a mark on the growing trading nature of comedy magic, becoming a member of The Magic Circle while specializing in prop performance magic.

What made his magic tricks even more memorable was his appearance at 6 feet 3 inches tall and his signature red fez hat. Playing the character of Tommy Cooper calls back to the days of vaudeville where caricatures were popularized, leaving a strong impression on audiences.

A British-born American comedy magician, Billy McComb became one of the UK’s leading comedy magicians during the 1950s and 1960s. His elegant stage tricks and flare for performing art landed him hundreds of appearances of television shows and movies.

In fact, he even appeared in the 1987 TV film Young Harry Houdini. Later on, he became a prominent figure at The Magic Castle. 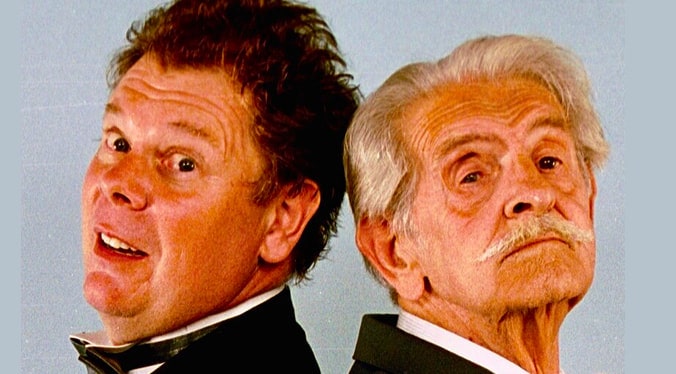 Even into his 80s, he continued performing regularly in Las Vegas, opening for The Amazing Jonathan. Some call him the father of modern magic, but if you really look at it, there are so many magicians who earn that title (especially the magicians we have lined up next.)

You may not know that Johnny Carson started out as a comedy magician. But he did! Before he went on to be the famed American television host of the 1950s and 60s we love today, he performed as Carnac the Magnificent.

This charming “mystic from the East” had a recurring role on The Tonight Show Starring Johnny Carson. When you watch those clips, it’s clear to see just how much comedy magic informed his role as talk show host.

A magician born in Scotland, Pat Page appeared in several magic shows, films, and television shows. Perhaps his greatest contribution to stage magic was his utility item used to conceal items or make them appear to vanish.

With this magic trick, he managed to trick people into believing the impossible was possible. His various master classes held in London led him to advise professional magicians while also publishing famous books exposing magic secrets such as in The Big Book of Magic.

The most popular magic tricks he devised include the Topit, Easy Money, The Miser’s Dream, and The Kitson Miracle. Page’s contributions in the world of close up magic continue to be felt today within the comedy magic community. You can still find these magic devices he popularized in any magic shop today.

After serving for his country and starting up a career in banking and insurance, Terry Seabrooke serendipitously found Billy McComb to be a claimant on the insurance inspection he was conducting. Imagine that! Some call it fate, while others call it a magic trick of its own.

This chance encounter led Seabrooke to pursue comedy magic, landing him appearances on a variety of television shows. And thank goodness he did! Otherwise, we wouldn’t have access to his magical inventions such as The Fire Wallet, Burnt Banknote, and Cigarette Through Coat.

Known as The Great Tomsoni, Johnny Thompson was an American comedian and Las Vegas illusionist who performed with his wife, Pamela Hayes. Their slapstick comedy magic act not only dazzled audiences. 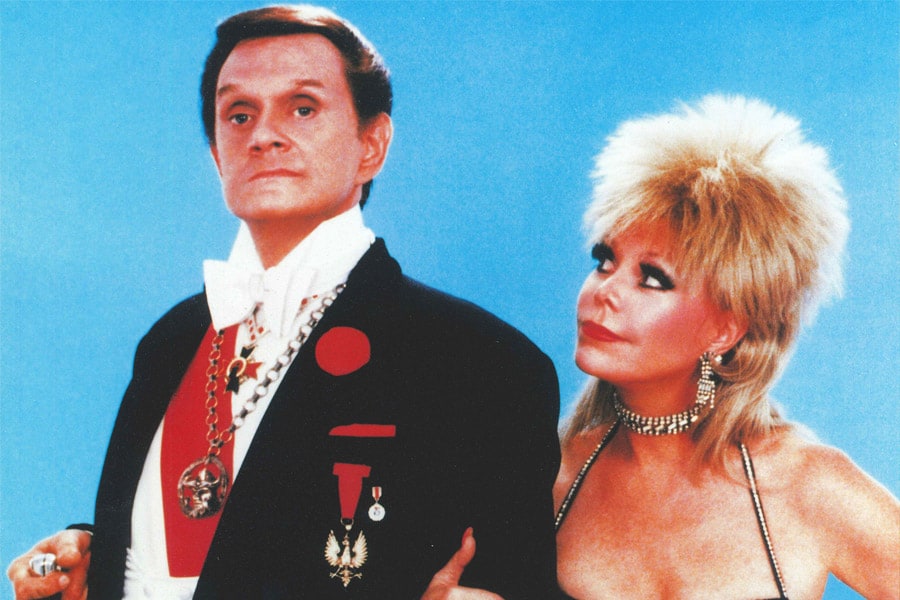 But they also served as guides for other up-and-coming magicians who later achieved fame. So if you’re a fan of Penn and Teller, Lance Burton, Criss Angel, or Mat Franco, you have these two greats to thank.

An English comedy magician and television presenter, Paul Daniels is most known for his fame achieved through The Paul Daniels Magic Show. His signature catchphrase, “You’ll like this… not a lot, but you’ll like it!” charmed thousands of viewers.

In 1982, he received “the “Magician of the Year” Award by the Academy of Magical Arts. He was the first comedy magician outside the US to receive it!

Bonus: How To Improve Decision-Making Skills In The Workplace With Comedy Jugglers

Long before Steve Martin became a comedian, he started out as a comedy magician working at none other than Disneyland. Performing as the great “Flydini,” Martin’s career as a comedy magician has been documented in the book “The Magic Years.” He even discusses his various magic tricks in his memoir, Born Standing Up.

Whit Haydn is an acclaimed comedy magician speaker known for his performances at The Magic Castle. But beyond that, his accolades have earned him over 30 nominations for close-up, parlor and stage, bar and lecturer.

British comedy magician John Archer has made a name for himself not only amongst magicians, but amongst television writers and actors too. He has commercially released a number of his magic tricks through various magic suppliers.

Obviously, this demonstrates his passion for continuing on the history of magic by passing magic tricks down. Most notably, he was awarded the Ken Dodd President’s Trophy for Best New Magical Comedy Entertainer in 1998.

You may know Harry Anderson from the 1984-1992 television series Night Court. But did you also know that he’s toured extensively as a comedy magician, dazzling events with his bag of magic tricks? 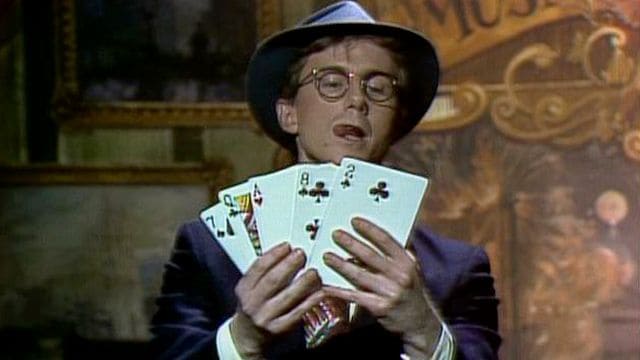 That’s right! In addition, he made eight appearances on Saturday Night Live during the years 1981 to 1985. And even had a recurring guest role as con man Harry “The Hat” Gittes on the successful television show Cheers.

Behind the stage name The Amazing Jonathan was none other than John Edward Szeles. His magic trick shows consist mostly of hijinks and audience interactions.

Though perhaps the greatest impression he left was his use of gore. Not exactly what we’d call a clean comedy magician. As the self-described “Freddy Krueger of Comedy,” Szeles worked as a year-round headliner in Las Vegas from 2001 to 2014.

Las Vegas headliner Mac King has held the title of longest running one-man show in the history of Las Vegas. The family-friendly show entitled, “The Mac King Comedy Magic Show,” has had the Excalibur Hotel and Casino in the Thunderland Showroom to call home.

In addition to appearing on a variety of television specials, King also performs at dozens of private corporate events each year. Now that’s a clean comedian we’re proud to get behind!

Penn & Teller are perhaps the most famous duo of magicians known to audiences today. Having performed together since the late 1970s, this duo has been featured in a number of stage and television shows.

Not to mention that they’re currently performing in Las Vegas at The Rio. In fact, their claim to Las Vegas fame is being the longest running headliners to play at the same hotel in Las Vegas history.

Nick Lewin is going strong as a comedy magician who makes audience participation a signature of every show. In fact, he considers his unique brand of comedy magic as “comedy with a twist of magic.”

He’s made a name for himself with his dry English sense of humor while seamlessly blending stand-up comedy with sleight of hand and mind magic. Plus, his award-winning show is guaranteed to provide you funny, non-stop entertainment.

If this name looks familiar, that’s because you’ve seen him in connection to Clean Comedians! Dana Daniels offers the very best of clean comedy and amazing magic. 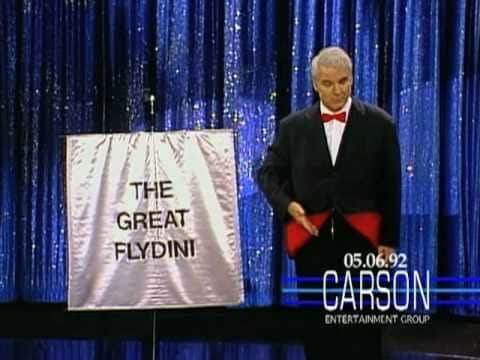 His entertaining and motivating acts have dazzled corporate events across the country. Even at companies such as McDonald’s, Lincoln Financial, and Frito-Lay!

Chipper Lowell has also been a familiar face around the Clean Comedians gang. As a visual and variety comedy magician, he has a number of credits under his belt, including The Tonight Show with Jay Leno, The Disney Channel, America’s Funniest People, and The MDA Telethon.

At just 17 years old, Adam Christing became a member of the world famous Magic Castle in Hollywood. He has since gone on to amuse, mystify, and delight more than 3,000 separate audiences across North America.

Not to mention that he brought you yours truly – Clean Comedians! His passion for corporate entertainment has built an empire of smiles, found both in his shows, radio and TV features, as well as various comedy books.

Aaron O’Brien has made a name for himself as a popular keynote speaker, magical master of ceremonies, and dynamic event entertainer. His membership with the Magic Castle in Hollywood began at just 13 years old.

But his success hasn’t stopped there. From appearances on CBS television to magical acts across America, O’Brien knows how to dazzle, inspire, and uplift corporate audiences.

Keep Reading: Funny Stand Up Comedians You Can Watch With The Whole Family