What Does A Comedy Juggler Do? 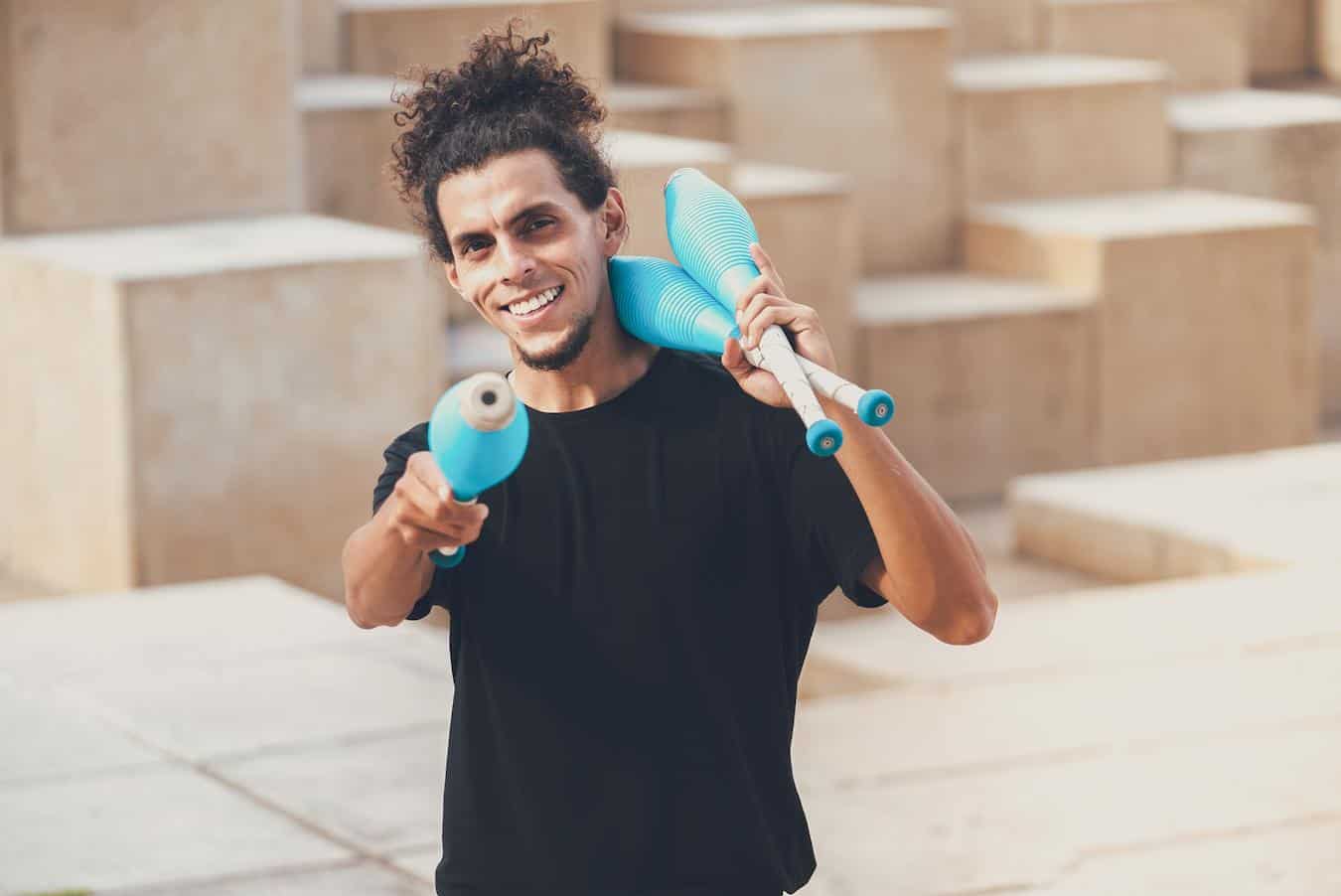 When you think of a “juggler,” what comes to mind? Someone who juggles objects like knives, chainsaws, balls, and rings?

Or someone who juggles everyday life responsibilities like work, family, and health? Each are professional jugglers in their own right.

But for this article, we’re calling back to the juggler you’d likely associate with the circus. So, where do jugglers fit in with your busy modern lifestyle today? Keep reading to find out.

See Related: Humorist Vs. Comedian – What’s The Difference Between The Two?

What is a professional juggler?

Merriam Webster dictionary defines a juggler as any person who juggles objects in the air simultaneously. But the latin root of the word gives us insight into its vocabulary and definition.

“Juggler” comes from the Latin joculare which means “to jest.” So really, a juggler is a person who is inherently funny and seeks to play, entertain, and juggle several objects in the air.

While the definition of and vocabulary surrounding the word “juggler” seems insignificant, it’s actually what gives us a glimpse into this powerful art form. Nowadays, we think of jugglers as people perpetually stuck in the circus.

But at its core, the dictionary definition of a juggler reminds us that a person who juggles and performs tricks does so in order to entertain. So juggling itself is a form of communication.

You might think that this type of person would only perform tricks at festivals, circuses, and other large scale venues. But as an art form, juggling is something that can be experienced outside of fairs and clubs.

In fact, it can be experienced anywhere that’s in need of a little communication. Even in your workplace.

What is a comedy juggler?

We can’t say the same for musicians, acrobats, or other entertainers you’d see at festivals, fairs, or under the circus tent. But comedy jugglers can be found in corporate settings.

We know it sounds crazy. But amongst our corporate entertainers, we do also house a juggling act that is sure to take your breath away (more of this amazing duo later). 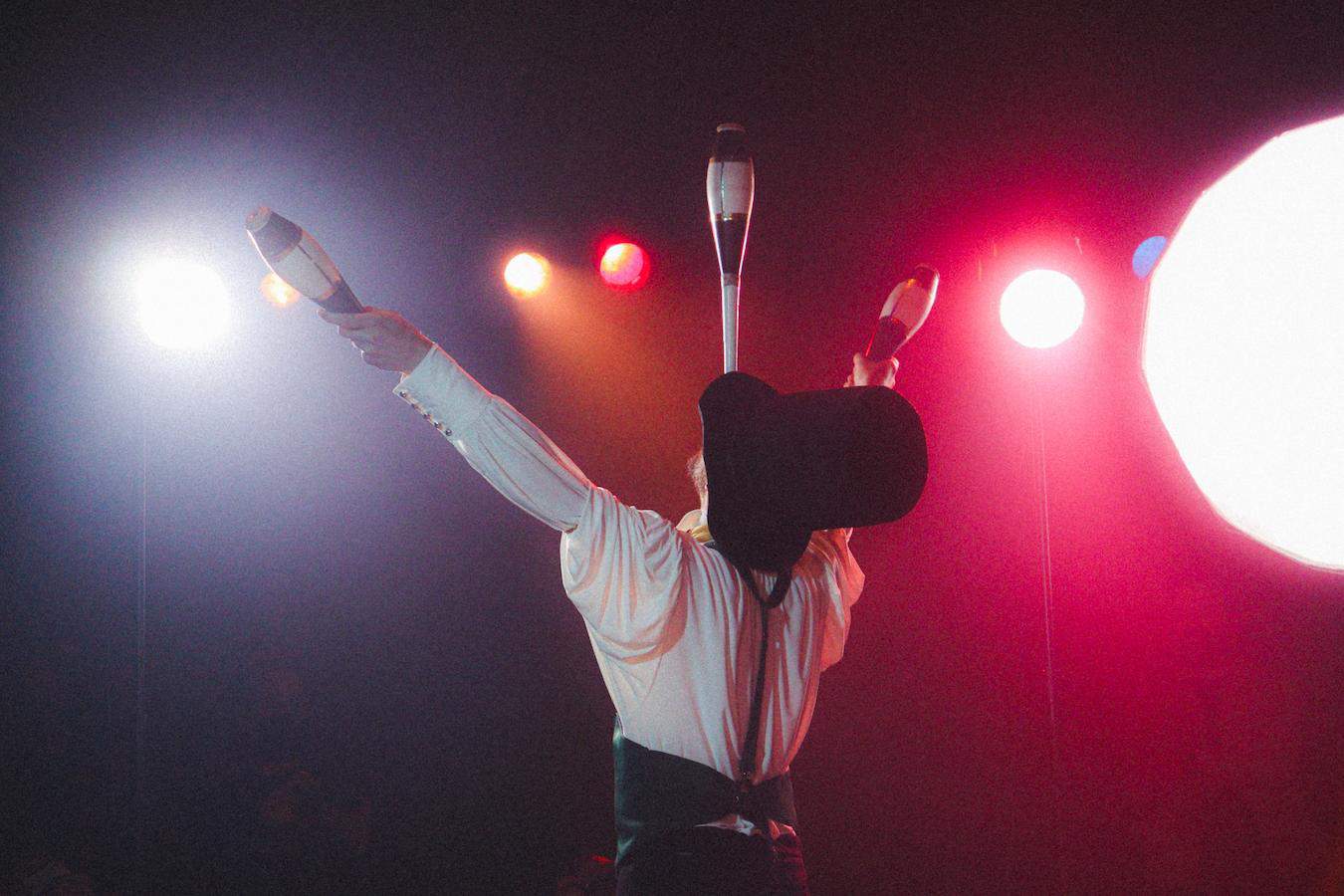 We already know from the dictionary definition of “juggler” that jugglers are meant to jest and play. Whether that’s with words, balls, knives, or otherwise is up to the juggler in question.

But a comedy juggler is kind of like a magician and a comedian combined. They’re someone who performs tricks with several objects in the air simultaneously while making people laugh and cheer.

This might be reminding you of kid’s birthday parties. But the same joy that a juggler brings to these parties is still the same joy we can experience as adults.

It’s just that more often than not, we lose the ability to play as we grow older. But a comedy juggler reminds us to embrace play – even with the most common props in the world like bouncy balls.

Even the simple act of a toss and a catch can feel like a piece of magic when we open ourselves up to it. So, where exactly did this art form come from and why do we continue to celebrate it today?

A brief history of professional jugglers

You might be surprised to know that juggling was a highly developed art long before the medieval period. In fact, evidence of juggling can be found in various sculptures, coins, and manuscripts from ancient Egyptian, Greek, and Roman artifacts.

As a profession, jugglers have always been heralded for their intensely technical precision. And this class act isn’t just reserved for human jugglers either.

In an early manuscript, a bear can be seen standing on its hind legs, juggling three knives. We know – it sounds crazy! But there are actually historical documents to back this up!

Expert jugglers of the circus

This ancient tradition went on to be incorporated into fairs and later circuses in the 19th century. And this is where the art form really began to take off.

As a new field of technical entertainment, jugglers would train by throwing balls into the air, juggling on a log, juggling on a unicycle, and more. Examples of some of these early pioneers include Severus Scheffer, Kara, Paul Cinquevalli, and Enrico Rastelli.

The modern juggler may seem like a rare beast. But there are two of them to make up the comedy juggler duo that is The Passing Zone.

Members Owen Morse and Jon Wee are two of the biggest jugglers on the planet today. They have performed on “The Tonight Show,” “The Today Show,” and even, “America’s Got Talent.” 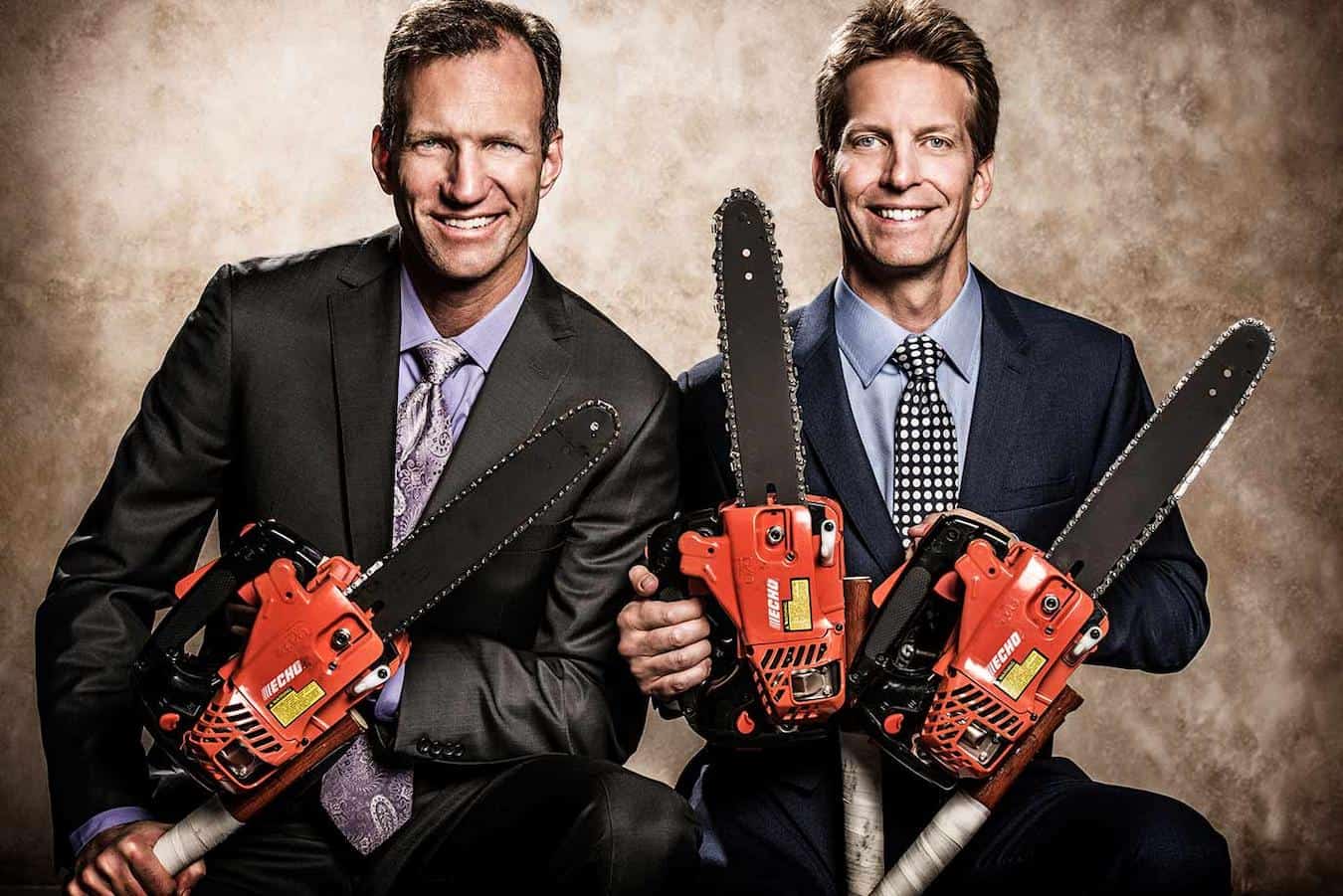 Many say that The Passing Zone is in a class by itself and we have to agree. These two juggle masters are taking the art of juggling to new heights, completely dismantling the idea that a juggler only belongs in the circus or at children’s birthday parties.

So, what other amazing qualifications do these two juggler extraordinaires have to boast? Both Owen And Jon hold 5 Guinness World Records and have won more gold medals from the International Jugglers Association than any other duo in history.

In addition to their amazing juggling skills, these two are also hilarious when they perform. In fact, Johnny Carson repeatedly invited The Passing Zone to appear on The Tonight Show. And they even had the chance to perform for Prince Charles at The Royal Command Performance in London!

These two alone have managed to show every audience they’ve performed for that the word “juggler” is no match for the act they have in store.

Why merge comedy with juggling?

The Passing Zone describe themselves as comic jugglers. So, why are they returning to the origin of the word and making “juggler” synonymous with comedy?

There is something inherently funny about objects being tossed in the air. Call it a return to innocence, but the log book says that such humor has given meaning to this art form time and time again.

Plus, when objects are up in the air, anything can happen. There’s a palpable sense of excitement when a juggler attempts different methods of catching or throwing an object.

We know that there are really only two outcomes: they catch it, or they don’t. But the excitement itself is no match for our curiosity in seeing if the feat can truly be accomplished.

#2. Juggling reminds us of what a person is capable of performing

A juggler is someone who has trained and trained at their art form. They didn’t just pick something up and miraculously catch it. 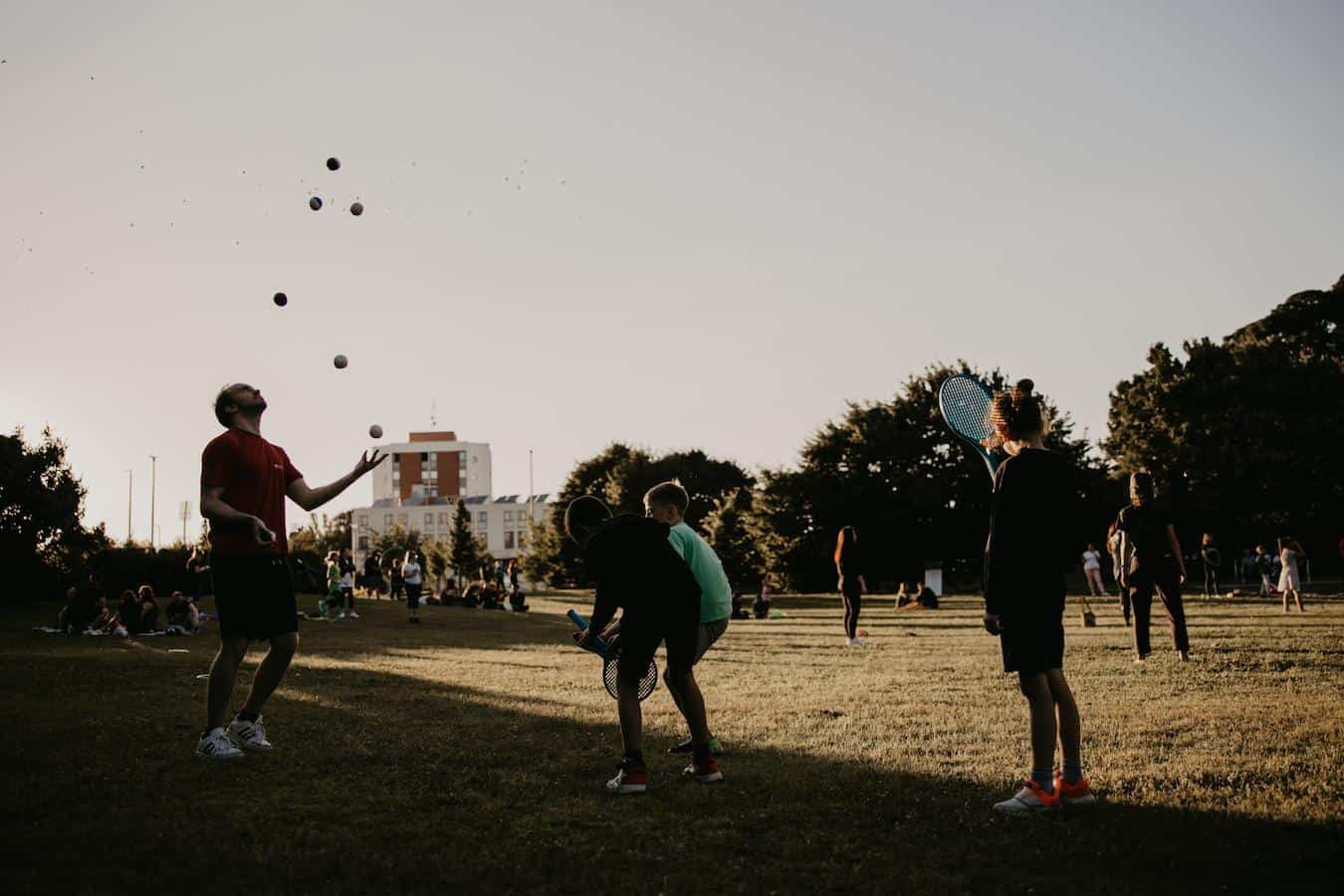 They worked for years and years to master such a technical skill. Sometimes, it takes a juggler to remind us of what humans can do when they dedicate their lives to something.

And when that craft can be shared with others, it makes it all the more exciting. Almost as if we’ve been training our whole lives to watch them be a juggler too!

Every entertainer, magician speaker, or comedian is looking to engage an audience whether with their words or with their act. Well, a juggler certainly knows how to grab an audience’s attention.

Because with every toss of an object up in the air, it’s a risk. That risk is exciting and enticing to watch.

All of this is to say that a juggler knows how to engage an audience like no one else. Because the art form itself begs to be watched and witnessed. It is an art form purely for the entertainment of others.

Let’s say you’re looking to break up the monotony of the office. Well, what’s better than bringing in a corporate juggler to do just that?

But as an entertainment act, a juggler is a surefire way to engage folks in the office. And get them excited about something they certainly don’t see everyday.

It’s just another way that we like to surprise and humor people at Clean Comedians. Because we believe that a workplace, a community, or any hub of people do best when they’re sharing a laugh together.

#5. A juggler uses common props, reminding us to view things from a different perspective

You might not think that a corporate entertainer is the way to go when your office is in a rut. But sometimes, you just need to shift your perspective.

A juggler, for example, uses common objects and props in their act. They may even use objects that we use in everyday life. 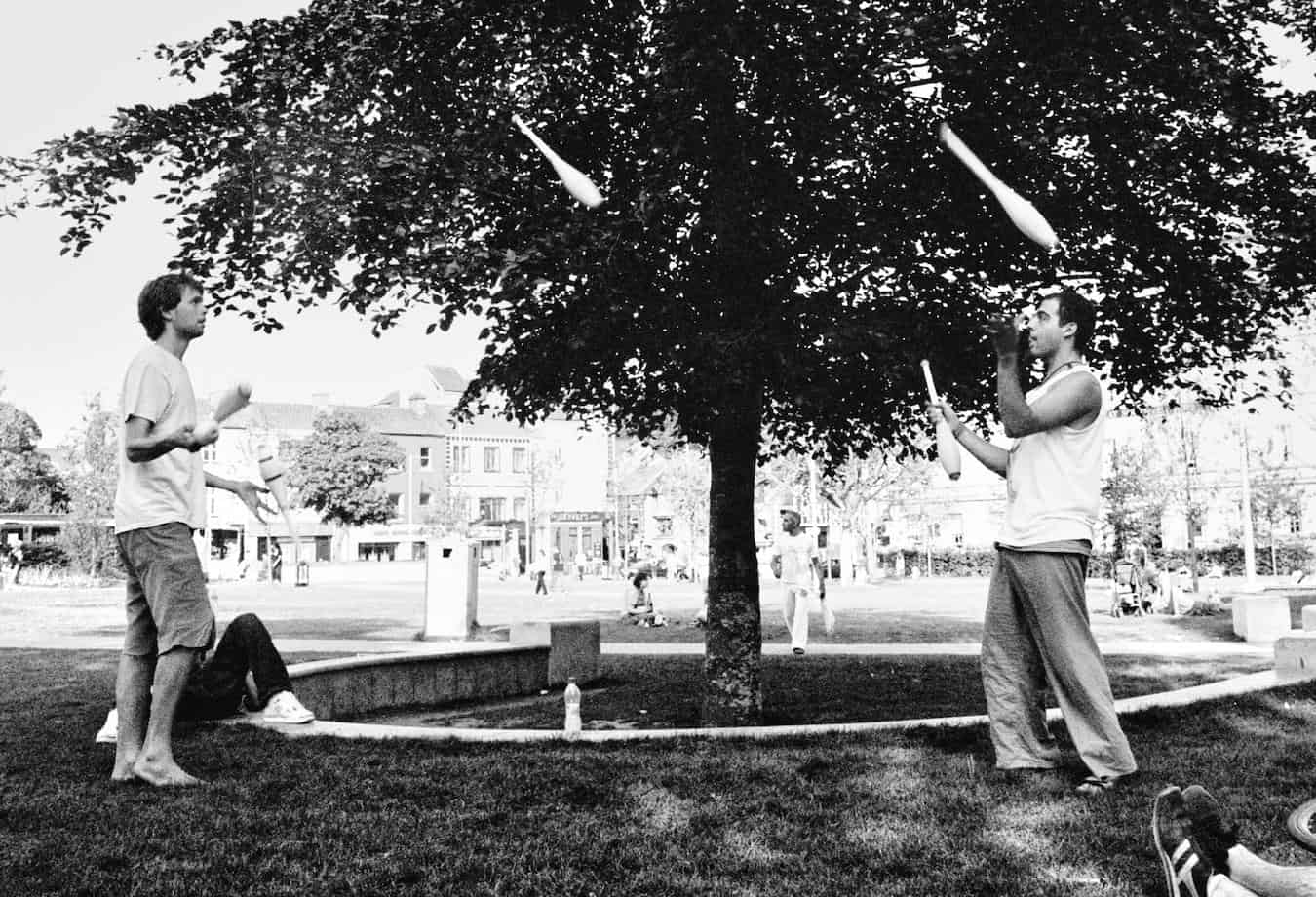 But to see those objects in the hands of a juggler is to see these objects as something entirely new. Maybe there’s a particular project that your team has been stuck on.

And you simply need a change of perspective to figure out that last piece of the puzzle. Either way, a juggler can offer you these insights simply by showing you that your stress ball you squeeze everyday also makes for the perfect juggling device.

#6. Juggling and comedy call back to some of the earliest forms of entertainment

We talked about the origin of the word, but “juggler” really does call back to some of the earliest forms of entertainment. So, when you think about it, watching a juggler at work really is connecting to generations past.

Civilizations have embraced entertainment for as long as people have been looking to be entertained. So, always.

And while a juggler may just be a word to some, it can recall childhood memories for others or inspire newfound wonder in onlookers and audiences. So the next time you hear that word, maybe you won’t immediately think of children’s birthday parties.

But rather, you’ll think of a tradition that’s stood the test of time.

We bet you didn’t think we were going to get as deep as we did when we introduced the word “juggler” to you, did we? Well, that’s exactly what you can expect from us here at Clean Comedians.

We’re here to entertain. But that doesn’t mean we don’t also dig deep.

Keep Reading: What Is A Humorist Keynote Speaker?