What Does An Emcee Do? 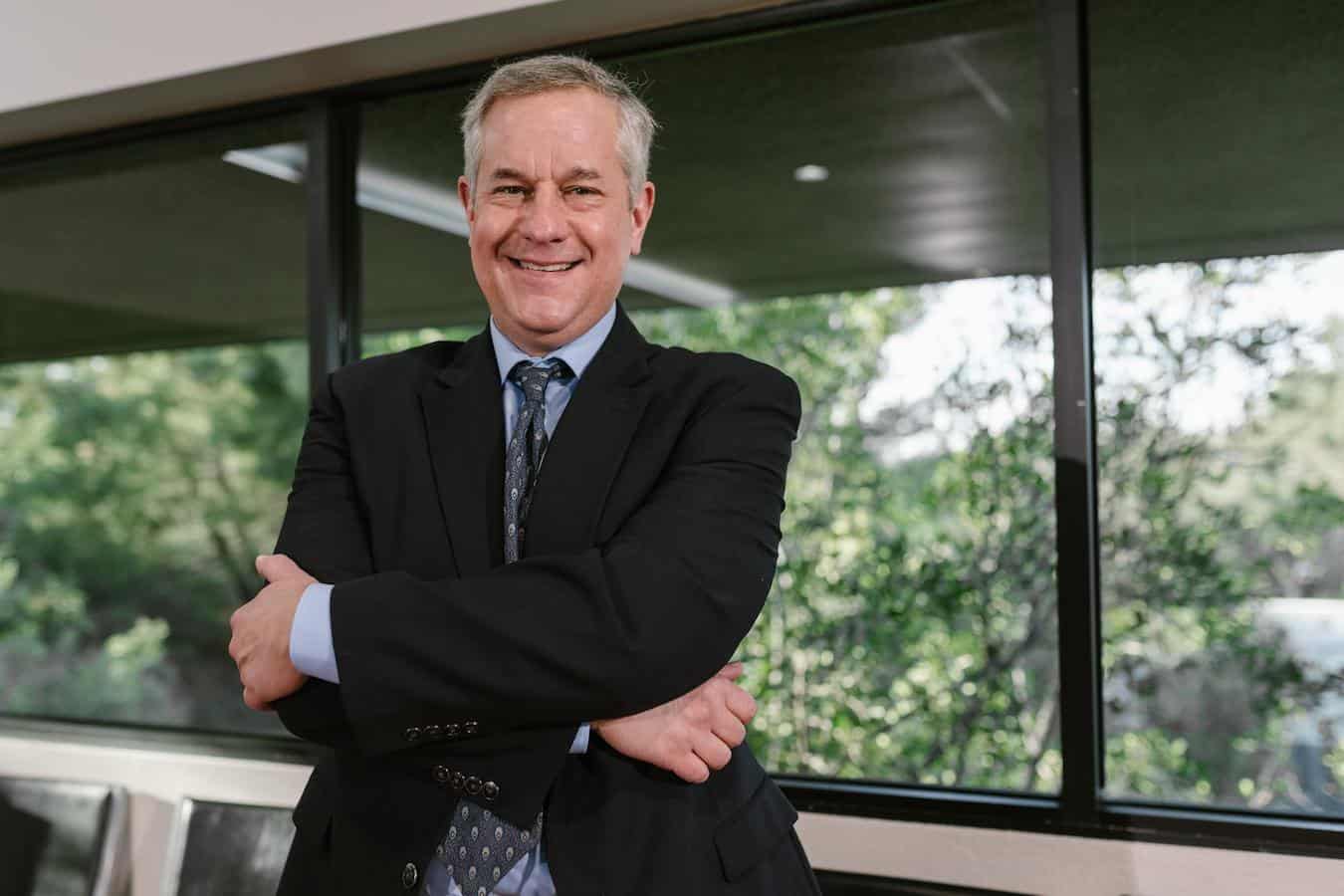 Your entire event is just around the corner – in fact, in the next few weeks! And you were smart enough to hire an emcee, right? … Right?

Okay, maybe you need a little convincing that a good MC is your key to a successful event. Because you might know all the pizzazz of a good emcee.

But do you know how much really goes into the job? Allow us to give you the inside scoop on what it takes to emcee events – and we’ll even throw in a couple of event tips too!

What is a professional MC?

A master of ceremonies plays a vital role in your event. As soon as the event starts, they’re the ones running the show, making sure that what needs to happen happens and what shouldn’t be happening stops happening.

Okay, maybe that’s a little too general. Because an emcee isn’t only the first person that welcomes audience members into the space.

They’re also in charge of getting the room excited for speakers and generally setting up a tone of success. So, if you hire a comedian MC to host your next event, what can you expect?

What does a corporate master of ceremonies do?

A master of ceremonies can greatly enhance your presentation, corporate event, or conference. Because they’ll know how to be both the life of the party and the organized host who keeps everyone on track.

#1. Meet with event organizers before the event itself

Many emcees will meet with the event organizers prior to the event. And if they don’t, consider your search for the best emcee a continuing one.

Meeting with clients before the event itself is the perfect opportunity for the emcee to get to know the event and help to determine any event goals. Not to mention that it puts event organizers, catering staff, and such people in contact with the host of the event.

Some may wish to walk through the venue with event organizers as well. And generally go over any announcements that need to be made on site or how many speakers they will be in charge of introducing.

But all in all, this is your chance as the client to make your goals known to the master of ceremonies. With this knowledge, they’ll be able to steer your event or ceremony in the very direction you want.

Event goals can mean a lot of things. Maybe your next event is an award ceremony to recognize deserving employees.

Or maybe it’s a corporate presentation meant to foster networking opportunities for business professionals. It’s clear to see that each of these events may have different goals in mind. 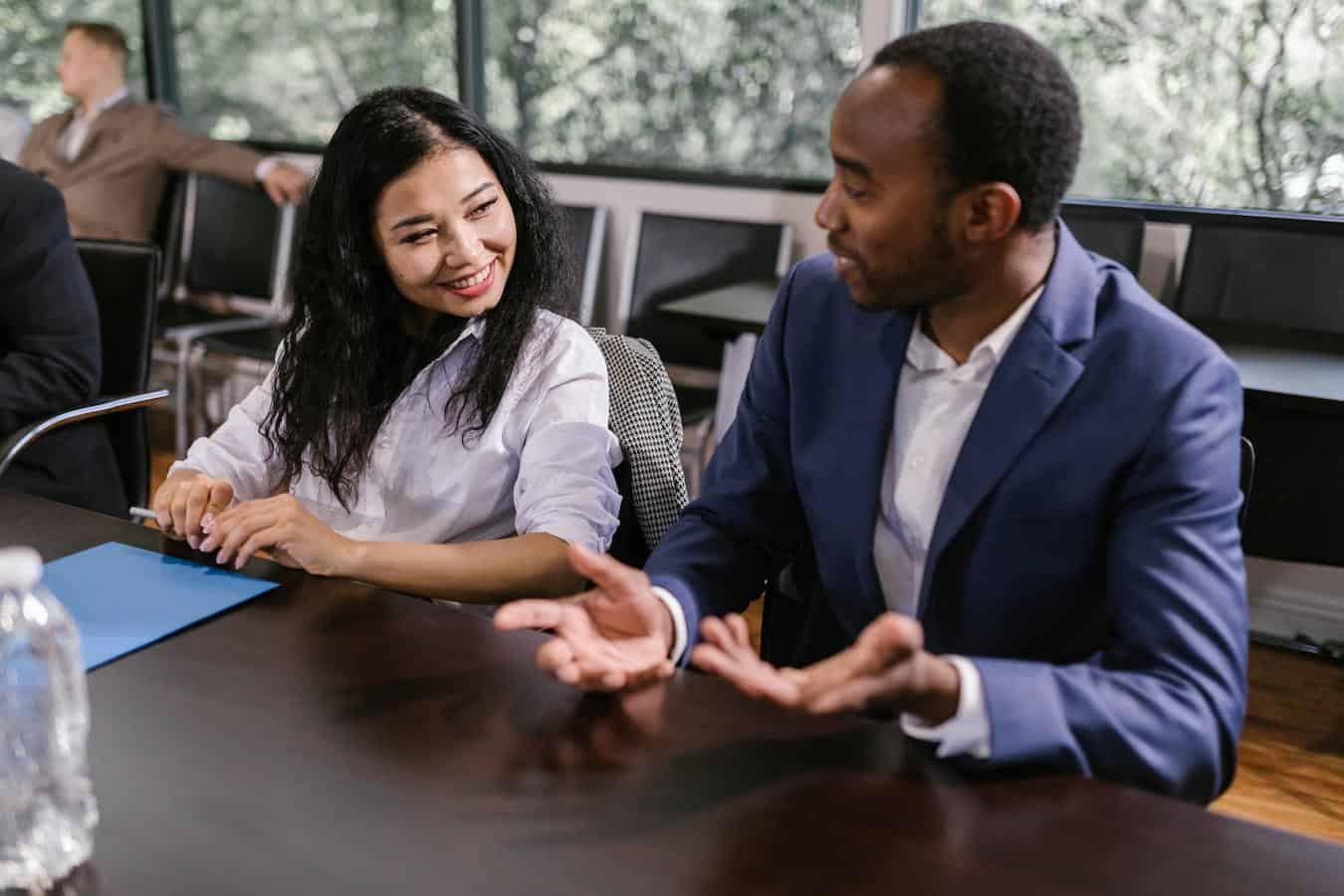 So going over what you want the crowd to come away with from the event is important to determine before the event itself. When you meet with your master of ceremonies, make sure to talk about what exactly you hope to accomplish.

And what you want the focus of the entire evening to be. Whether it’s highlighting jobs well done or getting audience members to mingle with one another.

A professional emcee knows to do their research. After all, they have the important role of introducing speaker after speaker.

So they should definitely know what they’re talking about before they introduce them! Additionally, if there are plenty of speakers on deck, then an MC will need to know how to keep the excitement alive.

Each speaker should be introduced to the world (or ballroom) with as much generosity, curiosity, and anticipation than the next. Because it’s the master of ceremonies’ job to make sure the audience is prepped and ready to welcome them on stage.

Besides, an MC acts as an ambassador for the speaker in question. So painting them in a good light before they even speak is an important thing to impart to the audience.

#4. Arrive early to go over duties and test out the sound system

Arriving early is not only a form of courtesy to the event organizers and guests. It’s also a chance for the master of ceremonies to go over any last minute details.

And testing out any sound equipment, of course. Besides, if an emcee is in charge of setting the tone for the event, then they might as well set the tone early by being prompt.

After all, a master of ceremonies is responsible for keeping your event on time. So the last thing they’ll want to do is ruin your hard work by showing up late.

When it comes to Clean Comedians, you can always rest assured that our professional emcees will be early and ready to go. That’s our guarantee!

Aside from bringing an undeniable stage presence, your master of ceremonies should also come prepared with a few announcements. Like how to get around the venue, who to talk to if you have questions, emergency protocols, and the like. 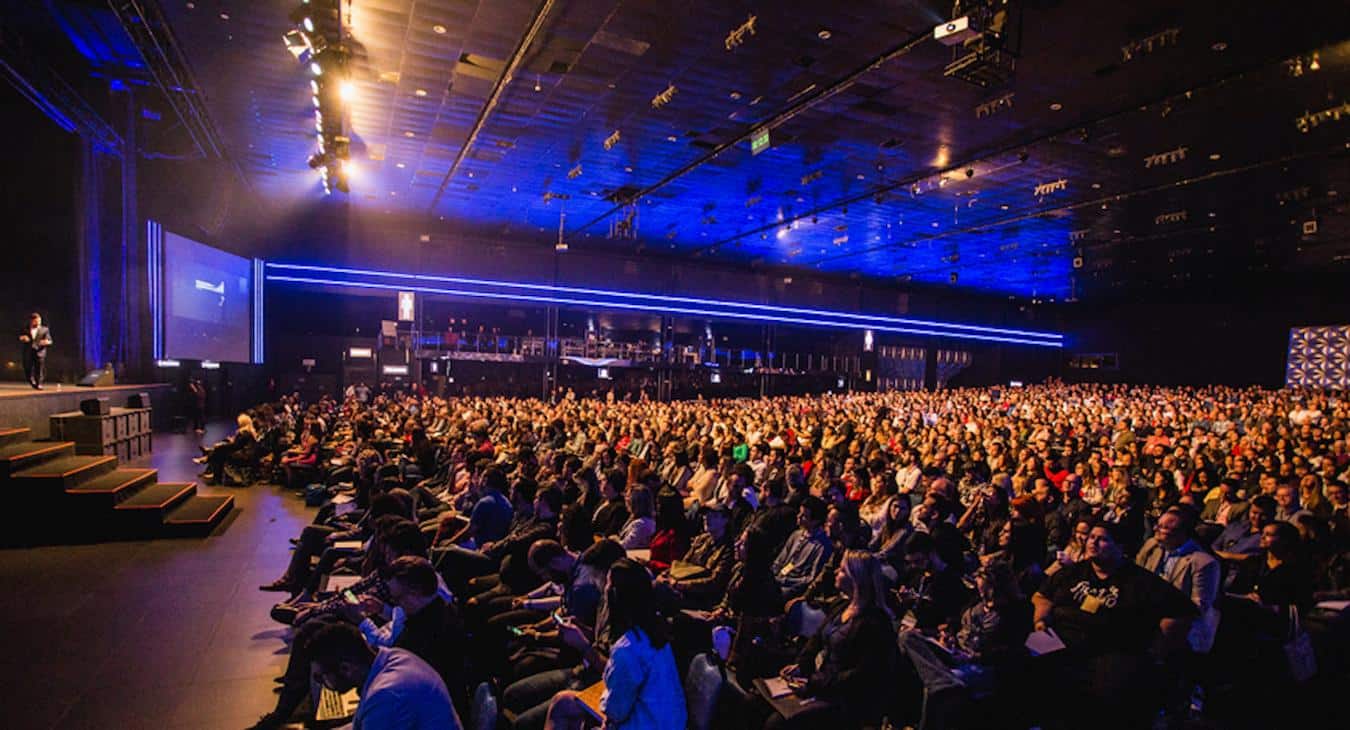 When you think about it, an audience likes to know what’s about to happen. Not that an MC should ever offer up spoilers.

But going through an event without any clue of what’s going to go on next can feel a little daunting. That’s why a good emcee will make sure the audience knows everything they need to know.

It helps to keep everyone on the same page. And it ensures that everyone is ready to have a good time.

#6. Act as an extension of your company

Maybe we should have mentioned this first. Because it really is one of the most important parts of choosing the right master of ceremonies for your event.

But no matter what, your MC should always act as an extension of your company. Not just a professional you hired out of the blue.

But somebody who is just as invested in the planning of this event as you. Sure, they bring their own skill sets to get the room excited and bring life to the party.

But guests should always feel like the organization or company is speaking through the master of ceremonies. Because an MC isn’t the star. They’re just facilitating where the light shines.

Bonus: What Are The 4 Types Of Corporate Culture?

#7. Introduce each speaker and presentation warmly

Earlier, we mentioned the importance of introducing each person to the stage with as much care as the next. But we thought it was too important to skip over so quickly.

Perhaps one of the biggest duties of an MC is making others look good. So if you have a high-profile speaker set to charm your audience, an emcee should make them look even better. 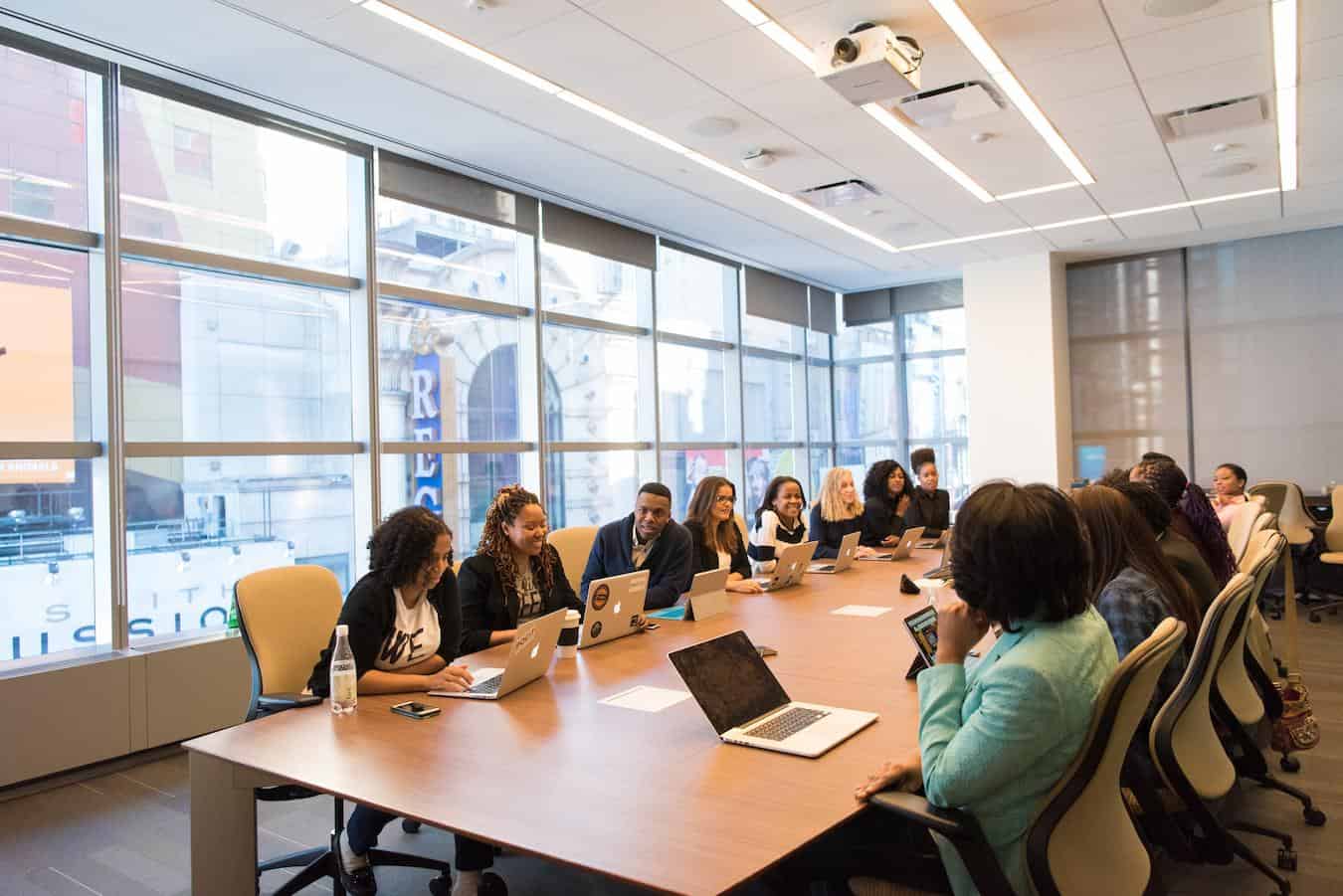 Because when they introduce your speaker, they’re setting up audience expectations. And guests want to feel that excitement to get themselves hyped up.

So make sure your MC knows how to highlight the uniqueness of each person or speaker you have planned on coming to the stage. It’ll make your event shine even brighter when everyone feels that they’ve been represented well.

#8. Ensure that transitions are smooth running

Unexpected hiccups can occur at any time during an event. But that’s why you have an MC there – to smooth out any issues.

For example, if your video stops working halfway through, an MC will know how to entertain the crowd until the technical difficulty gets figured out. Or if the person they were planning to introduce runs late, then they’ll know how to problem-solve right in the moment.

Even without issues, you’ll still have transitions between speakers. And this is when an emcee will make sure the stage never sees a moment of dead air.

Transitions can often leave audience members feeling disconnected – simply by virtue of the fact that it’s a down period between acts. But the job of an MC is to make sure the audience remains engaged and just as ready to take on the next speaker as the previous one.

#9. Pick up slack and keep the event on schedule

Let’s say one speaker runs overtime in their slot. Or maybe another just needs a little nudge to speed up their presentation.

A corporate entertainer will know how to pick up the slack later on in the event. Or humbly and strategically encourage the speaker to either ramp it up or finish.

Because the last thing you want is an event that runs over. If it runs over because everyone’s having a great time and doesn’t want to leave, then that’s great.

But in general, you want to respect your audience’s time. And a master of ceremonies will know how to help you do that.

Listening to speaker after speaker can sometimes be a little bit draining for an audience. After all, there’s only so much they can absorb in a single sitting.

But that’s why an emcee will have a lot of different tricks up their sleeve. Like getting the audience to stand up! 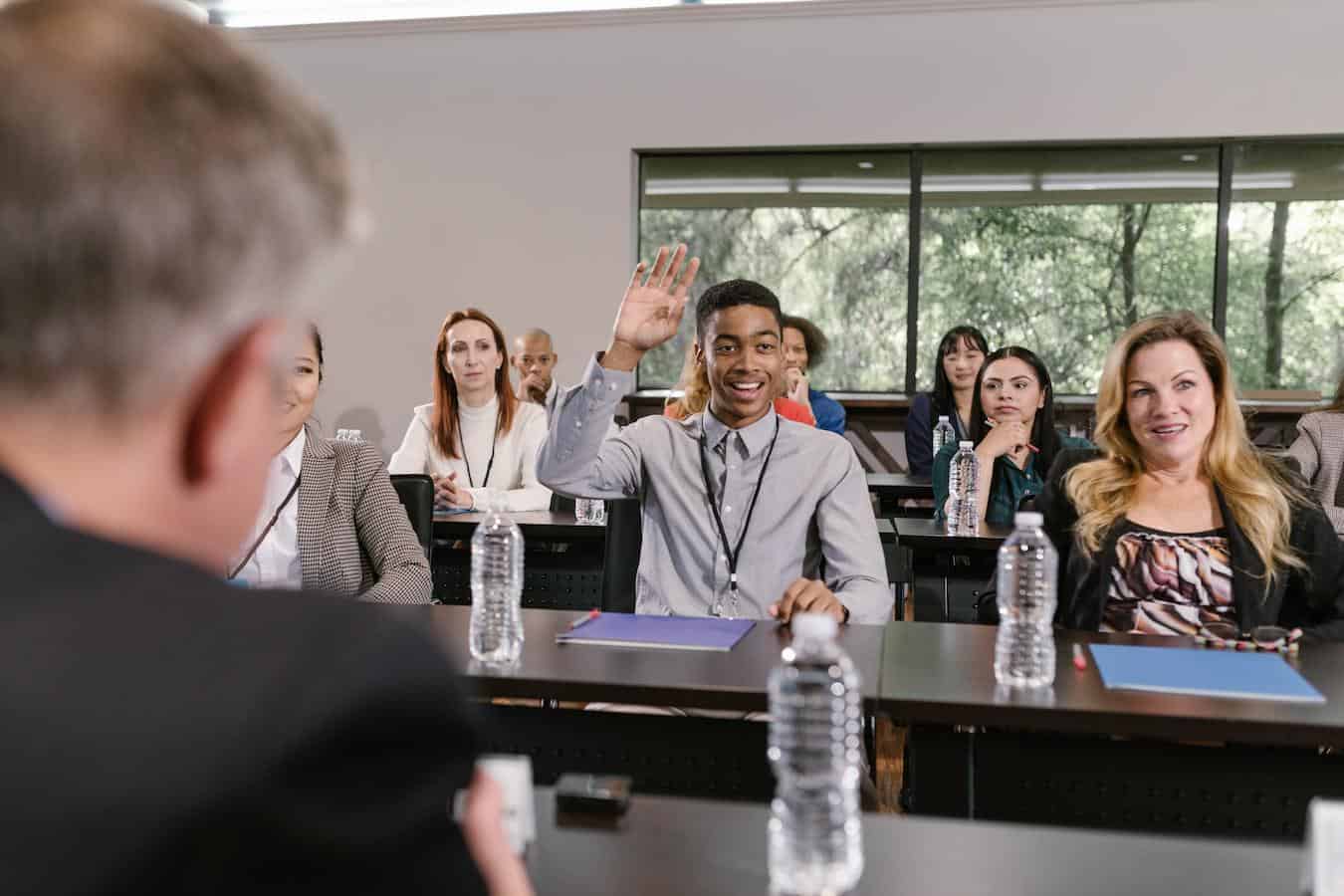 Sure, you can liken it to the seventh inning stretch. But getting your audience back in their bodies will help to energize them and mobilize them for the next event.

So getting your audience to move around isn’t just one of the better tips we have to offer in terms of audience engagement. It’s also a chance to get people talking to one another and networking while they’re at it.

#11. Thank audience members for their attendance and participation

The job truly isn’t done until the MC thanks the guests for participating. After all, it’s kind of a feat to trust someone to guide a group of people through the entire event.

But a gracious emcee will always leave folks feeling lighter and happier than before. Because at the end of the day, their job is to facilitate connections and bring light to those on stage.

Furthermore, this outro is a great chance for the emcee to follow up with any final announcements. Whether it’s information on the location of the following reception.

Or when the next event taking place will occur. Either way, your emcee should leave the audience with just a few more tips before they head out the door. Just to make sure they keep thinking about the event even after it’s done.

Hopefully, we’ve helped you understand just how much an emcee can help your event. Because all of the planning and hard work that you put into the event should only be amplified by a master of ceremonies.

Not squashed by it. Or disregarded by them.

So take these tips with you when finding the best emcee for your event. You may find yourself becoming just a little bit pickier when it comes to choosing an event host.

But if you’ve put all of this time and effort into it, then you want your event to be as well represented as it can be. So take it from us.

And take these tips with you too! It’s the least we can offer – well, that and the chance to emcee your next event.

Keep Reading: How To Host A Virtual Award Ceremony